Home of the Manatees

Manatees are large marine mammals that favor the warm waters of the Gulf of Mexico and cluster in and around Crystal River and Homosassa, especially during the cooler winter months. Our relatively warmer waters, with an average temperature of 72°F from the springs, attract these gentle animals. In the Summer months, as many as 230 have been seen on a single day. During the coldest times, up to 476 can be found herding in the waters of Citrus County.
The park serves as a rehabilitation center and refuge for injured and orphaned endangered West Indian manatees. A unique feature of the park is the famous "fishbowl" where visitors can view the manatees in the spring from an underwater observatory - staying dry the entire time!

Three Sisters Springs is a complex of three spring areas, with many vents and sand boils that help feed Kings Bay, the headwaters of Crystal River in Citrus County, Florida. These springs also constitute one of the most important natural warm-water refuges for the endangered Florida manatee.

Kings Bay and the Three Sisters Springs also attract large numbers of boaters, recreational divers, snorkelers, and swimmers, many of whom seek out manatees for a close viewing experience. The influx of visitors, primarily there to see manatees, provides a major economic impact to the Crystal River community.

The mouth of the Three Sisters run is blocked by concrete posts to prevent boat access; only swimmers, canoers, and kayakers can enter. The land around the springs is private and posted and much of it has been extensively dredged to allow homes to be built along the channels and have access to King's Bay.

At one time, Three Sisters Springs was used by Jacques Cousteau to help rehabilitate "Sewer Sam," a manatee named after he became trapped in a Miami sewer system and was subsequently rescued. Cousteau and his crew and volunteers kept Sam in Three Sisters Springs until the manatee was acclimated to the area. Upon release, Sewer Sam swam out into Kings Bay, where he joined the other manatees gathering there.

In the 1980s, the then owner of the property known as Three Sisters Springs decided to fill the hardwood swamp that spread out from the Three Sisters Springs and the adjacent Idiot's Delight and Magnolia Springs. The owner brought in a huge drag line and spent more than a year digging a 15-acre, 40-foot deep borrow pit. Dirt from this borrow pit, now called Lake Linda, was used to fill the adjacent hardwood swamp, burying trees and vegetation, filling the area one to two feet higher, and obliterating the much-needed filtering action of the entombed swamp.

The previous owners of Three Sisters Springs property had plans to develop the 57 acres of land adjacent to the Three Sisters Springs second magnitude springs and Magnolia Springs first magnitude springs. This development would entail residences and multi-family residences as well as the potential removal of "spring water" to be bottled from the borrow pit dug in the 1980s. The owner initially sought a permit to extract 1.2 million gallons per day. The request was later reduced to 426,000 gallons per day, and the owner is considering building a bottling company near the site. As of February 2003, the landowner was allowed by the Southwest Florida Water Management District to withdraw up to 100,000 gallons per day, and water had to be pumped from a site away from the spring.

These same owners had stated that they would be willing to sell the property for the right price and, in particular, were looking for it to be managed by the U.S. Fish and Wildlife Service for the Crystal River National Wildlife Refuge. This refuge was initially established solely for the protection of the Florida manatee.

The 2000 Florida Springs book states that priority should be given "to the acquisition of springs that cannot be adequately protected and managed by the current owner or at risk of being developed." These recommendations are as valid today as when the report was written in 2000.

In July of 2010, the City of Crystal River and several Government agencies purchased the 3 Sisters Springs property, and it is now to be preserved indefinetly.  The U.S. Fish and Wildlife Service plans to manage the site and build an observation platform for citizens to view the Springs area.

How to get to 3 Sisters Springs:

The coastal waters of Citrus County, Florida, where spring-fed rivers flow into the Gulf of Mexico, are a favorite habitat of manatees. These very large mammals spend their entire lives in water, coming to the surface only as necessary to get a breath of air every minute or so, depending on their level of activity.

Citrus County's manatees, known as West Indian manatees and by the subspecies name the Florida manatee, are related to West African manatees, a creature called a dugong, and a now-extinct animal called the Steller's sea cow. The word 'manatee' is derived from a Carib native word meaning 'breast' and probably refers to the suckling of baby manatees at their mother's breast.

Manatees are large animals. Adults weigh between 900 and 1200 pounds, and measure 9 to 10 feet in length. Their bodies are shaped like an elongated oval with a paddle-shaped tail providing effective propulsion. Baby manatees come into the world weighing between 60 and 70 lbs. 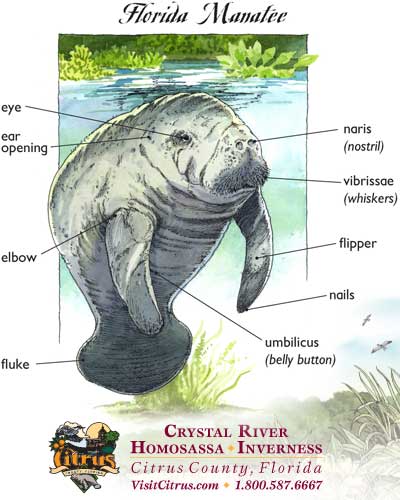 Florida manatees have a low metabolic rate and a very low tolerance for cold weather. When winter settles over North America, manatees seek out warmer water, which is why they are so abundant around Citrus County, with its many spring fed rivers that remain constantly—and comfortably—mild regardless of the weather. Manatees do well in salt or fresh water. Their diet is totally vegetarian, and to maintain themselves, adults eat 10 to 15 percent of their body weight each day in aquatic vegetation. That's more than 100 pounds of watery 'salad.'

It seems that manatees spend about half their time sleeping. They drift down to the bottom in relatively shallow waters and sleep. Being air-breathing mammals, of course, they need to take a breath now and then, at intervals as long as 20 minutes. They rise to the surface, exhale noisily through the nostrils located on the tip of their snout, take a deep breath and sink back down to resume their nap.

Manatees don't have any natural enemies, and under ideal conditions they can live 60 or more years. The biggest threat to manatees comes from human activity. They suffer cuts from motorboat propellers, they get caught in navigation locks, spillways and other water control systems, they eat dangerous discarded junk tossed into the water by thoughtless boaters and they get caught in nets and lines intended to catch fish and crabs. Overall, according to those who study manatees, their most serious threat comes from a loss of habitat. As coastlines and river banks are increasingly developed, the manatee population declines.

It takes five years for a female manatee to mature (Males require nine years to mature.) and become capable of reproduction. The gestation period is about 13 months, and single births are most common. Occasionally one sees a mother with two infants but twins are rare. Manatee calves remain with their mothers and continue to nurse for as long as two years.

In recent years there has been a great deal of interest in Florida's migratory population of West Indian manatees. Efforts to conduct an annual census include aerial observations from helicopters, concentrating on favorite spots such as large, spring-fed pools and the outflow of cooling water from electrical power plants. One source (Geocities) puts the number at 2,600. But other sources point out the presence of manatees in southern waterways of Alabama and other Gulf coastal states, and up the Atlantic coast into the Carolinas. There are occasional summertime sightings as far north as the New York City area and even to coastal Maine. The mobility of manatees impedes efforts at counting their numbers.

Manatees are protected in the United States under federal laws, and additionally, in Florida, by the Florida Manatee Sanctuary Act of 1978. There are also local laws and regulations in several Florida communities governing the operation of power boats in waterways frequented by manatees. The gentle nature of manatees encourages some people to swim in waters where these creatures gather, sometimes touching the animals and rarely—and illegally—offering lettuce and other vegetable greens. This can be a dangerous activity if a mother manatee feels that a baby manatee is threatened. Every wildlife authority agrees that manatees are best left totally alone, and never, under any circumstances, fed.

In summary, manatees are another of the fascinating wild creatures that make Florida, in general, and Citrus County, in particular, so interesting and rewarding to visit. These very large aquatic animals go about their business gently and quietly, seemingly tolerant of and undisturbed by people watching them. They'll survive for future generations if people refrain from feeding, touching or otherwise interacting with them, if motorboat operators obey slow speed and forbidden zone warnings, and if their habitat is protected against overdevelopment, dredging and other environmental threats.

By swimming, boating or diving in Florida's inland waterways, you may be endangering the life of the West Indian manatee which is protected by federal and state laws. The Marine Mammal Protection Act of 1972 and the Endangered Species Act of 1973 make it illegal to harass, capture or kill any marine mammal—including the manatee. In addition, the Florida Manatee Sanctuary Act states: "It is unlawful for any person, at any time, by any means, intentionally or negligently, to annoy, molest, harass or disturb any manatee."

Manatees can be observed and water-related activities can be accomplished without violating the provisions of these three acts. The following guidelines are designed to help you better understand these regulations and explain how you can have a memorable experience while protecting the manatees.

Avoid harassing manatees. Harassment is defined as any activity which alters the animal's natural behavioral characteristics. Examples of harassment include the following:

Watch for These Signs

There are a few things you should remember while visiting Kings Bay, Crystal River, Florida. The U.S. Fish and Wildlife Service and other law enforcement agencies monitor boat speed and sanctuary restrictions specifically for protecting the endangered manatee. These restrictions also give additional protection to divers in the area. Your cooperation is needed to help protect manatees and divers.